Cause for Beatification and Canonization

What is the status of the Cause of Mother Julienne of the Rosary? 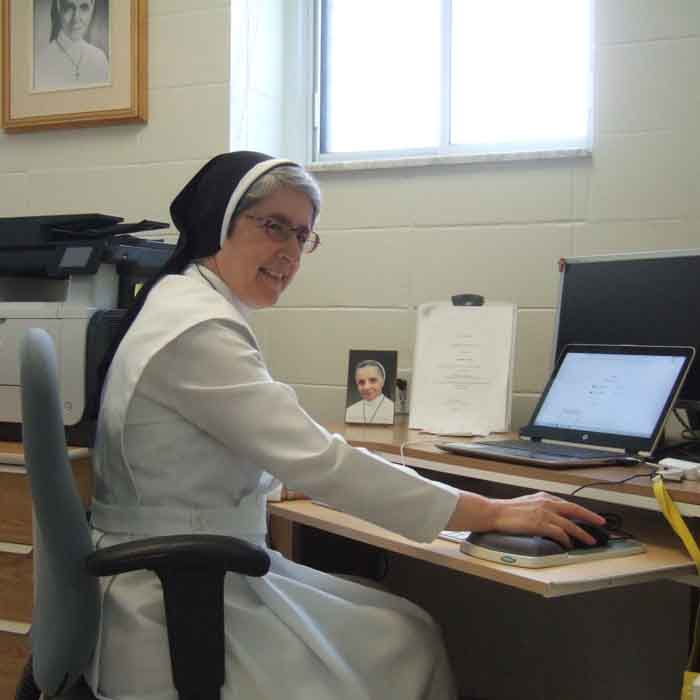 Since September 2017, Sister Francine Bigaouette, o.p., has been working on the drafting of the Positio, a large document on the life, virtues and reputation for holiness of the Servant of God. This work, which she should finish in 2021, is being carried out under the supervision of a Relator from the Congregation for the Causes of Saints. Until January 2020 it was Brother Jósef Kijas, a Polish Conventual Franciscan. On February 1st of the same year, he was replace by Brother Szczepan Praśkiewicz, a Polish Carmelite friar.

Once completed, the Positio will be put into the hands of the readers of the Congregation who are in charge of examining it. We invite you to pray with us for its acceptance. Mother Julienne of the Rosary would then be declared Venerable and presented as a model of Christian life. For her subsequent beatification, God must "put his seal" on the human discernment made throughout the whole process and especially during the examination and acceptance of the Positio. This seal consists of a miracle obtained through the intercession of the Servant of God. That is why we are invited to pray fervently from now on to obtain it. 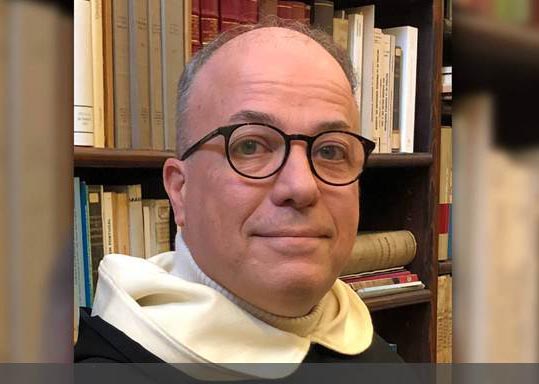 Relator to the Congregation for the Causes of Saints, Br. Szczepan Praśkiewicz 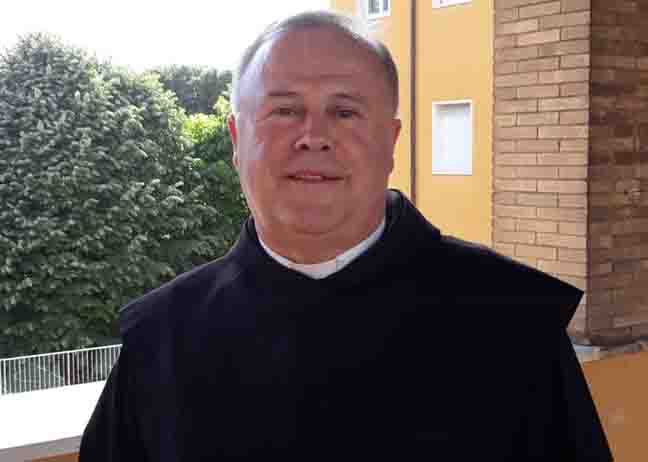 Source: Courtesy of the Carmelite Brothers

From November 2015 to December 2021, Brother Gianni Festa, o.p., as Postulator General of the Dominican Order, had the responsibility of seeing to the advancement of the causes of beatification and canonization of members of the Dominican Family (friars, nuns, sisters, laity) on their way to the recognition of their holiness by the Church. Since December 2021, it is Brother Massimo Mancini, o.p. who has taken over the task. Like us and with us, our Dominican friars have the desire to see Mother Julienne of the Rosary become one day part of the host of saints who have marked the history of the Order and of the Church throughout the centuries.

Brother Gianni Festa, o.p., as Postulator, represents our Congregation directly to the Congregation for the Causes of Saints. Since he resides at the Convent of Santa Sabina in Rome, he must rely on a Vice-Postulator who lives in the Diocese of Quebec. Sister Françoise Guillot filled this role until 2018. We are immensely grateful to her for all the very demanding work she accomplished. Since January 2019, Sister Murielle Bérubé assumes this role. 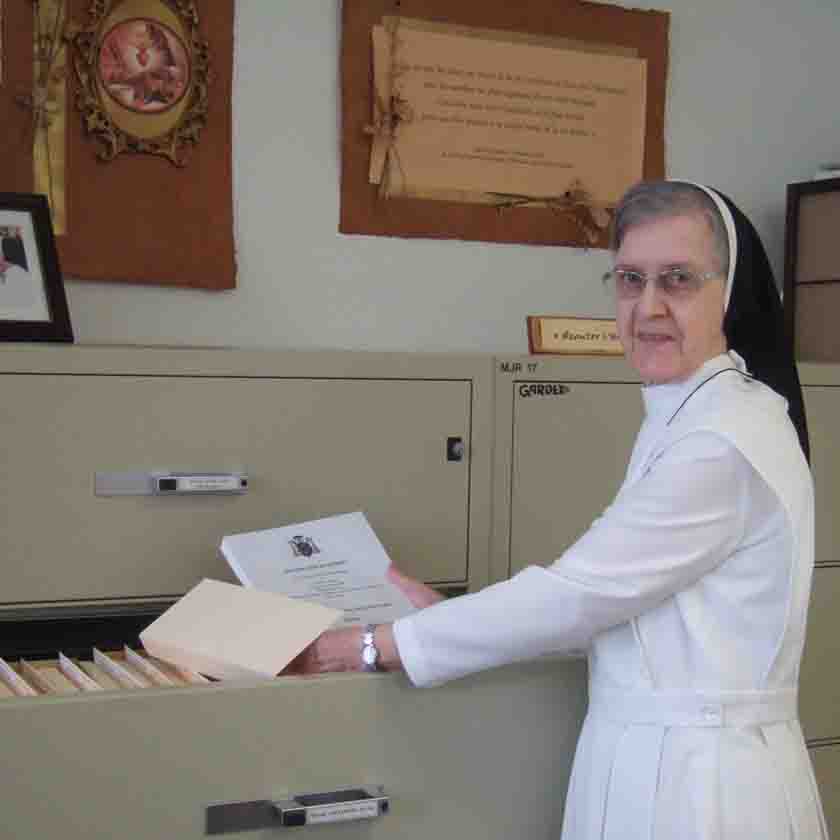 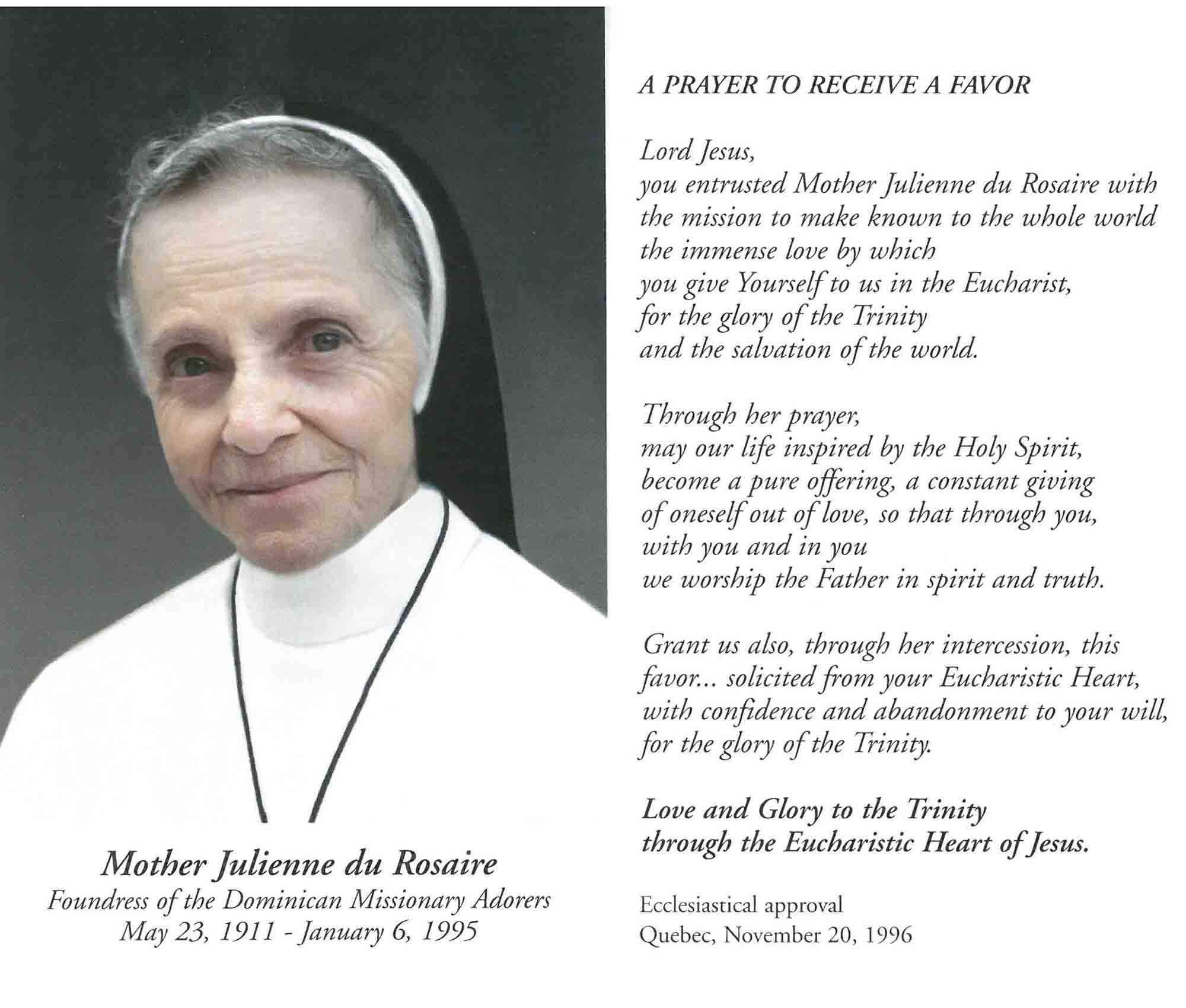 The reputation of holiness of Mother Julienne of the Rosary is continuous and attested to by many witnesses. But let us not forget to pray for a notorious miracle, that is, a total, lasting and non-recurrent cure, which medical science alone cannot explain. Such a miracle would be a confirmation of her holiness and a sign of God's active presence in and through her.

Please report any favors obtained to :

Form is deprecated, please contact the webmaster to upgrade this form.

With the word “favor”, we consider all graces obtained, here, through the intercession of Mother Julienne of the Rosary. These are often requests, dear to our hearts, which are granted. These favors can be diverse, of a material or spiritual nature: work desired for an unemployed person, healing, settlement of a difficult situation, graces of conversion, of abandonment to God's will, etc. In faith, we recognize the power of intercession of the Servant of God before the Lord. The favors obtained testify to the Servant of God's reputation of holiness.

In general, the miracle is an extraordinary event, contrary to the laws of nature and therefore, by definition, scientifically inexplicable.

For Christians, the miracle manifests a special intervention of God, in response to a person's prayer. If it is a cure for an illness, for example, it can be considered a miracle if it is not the result of medical intervention and must be one that medical science cannot explain. Therefore, it must be submitted to scientific examination by experts in the field.

If you wish to pray for a miracle that will serve for her beatification, it is important to pray only through her intercession so that we may be certain that it is through her that the grace is obtained.

History of the Cause

The first condition: the reputation of holiness

For a cause of beatification and canonization to be introduced into the Church, there is an absolutely fundamental condition: that the person have a "reputation of holiness.

In the case of Mother Julienne of the Rosary, this reputation of holiness had already been acquired during her lifetime in the eyes of those who knew her. After her death on January 6, 1995, an uninterrupted crowd passed in front of her body. At her funeral, on January 10, a hundred priests were present and two thousand people filled the church of La Nativité-de-Notre-Dame de Beauport; other people who came to attend were obliged to stay outside in the freezing cold. Very soon, one started reading in the newspapers and in letters: "we give thanks to Mother Julienne of the Rosary for the favors obtained" or other similar formulas. And her reputation of sanctity lives on.

Encouragement from the Archbishop of Quebec City

Very early, the Archbishop of Quebec, Archbishop Maurice Couture, r.s.v., encouraged the Prioress General of the time to go forward with the steps taken for a theological appreciation of the teachings of Mother Julienne of the Rosary and the spreading of her message. He also asked that the testimonies of elderly or sick people who knew her be collected without delay; this, he said, will be an important documentation for the history of the Congregation and, later, for a possible opening of her cause.

In response to repeated requests, with the Archbishop's approval, a prayer to ask for favors from the Eucharistic Heart of Jesus, through the intercession of Mother Julienne of the Rosary, was published in November 1996. 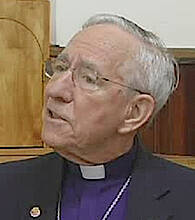 Request to the diocesan bishop to introduce the cause for the beatification and canonization of Mother Julienne of the Rosary.

According to Canon Law, a cause can only be opened five years after the death of a person enjoying a reputation of holiness. In 2001, after this period had elapsed, the Dominican Missionary Adorers took steps to ask the Archbishop of Quebec permission to introduce the cause for the beatification and canonization of Mother Julienne of the Rosary. To this end, on December 22, 2001, the Postulator General of the Dominican Order, Father Innoncenzo Venchi, o.p., presented a first petition. However, because of the Holy Father's acceptance of Archbishop Couture's resignation as Archbishop of Quebec, it became necessary to wait for his successor to arrive before moving forward.

It was therefore Cardinal Marc Ouellet, the new Archbishop of Quebec, who would receive the second Supplication requesting the official opening of the cause of Mother Julienne of the Rosary, presented November 1, 2004, by Brother Vito Tómas Gómez García, o.p., the new Postulator of the Order. The following day, November 2, Cardinal Ouellet issued the Decree opening the Canonical Inquiry and Research into the writings of the one who could henceforth be called a "Servant of God.

Work to collect all necessary materials

From the end of 2004 to the end of 2007, the Vice-Postulator, Sister Françoise Guillot, o.p., together with the Episcopal delegate, Monsignor Jean Pelletier, p.h., diligently pursued the necessary work for this stage. On January 16, 2008, the reports of the theological censors and the summary of the report of the Historical Commission were given to Cardinal Ouellet. On the following March 31, Cardinal Ouellet sent a report and a brief notice on the life of Mother Julienne of the Rosary and on the importance of her cause, to the Congregation for the Causes of Saints requesting authorization to open the Diocesan Inquiry. 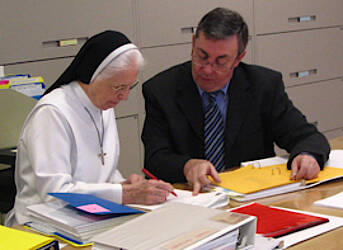 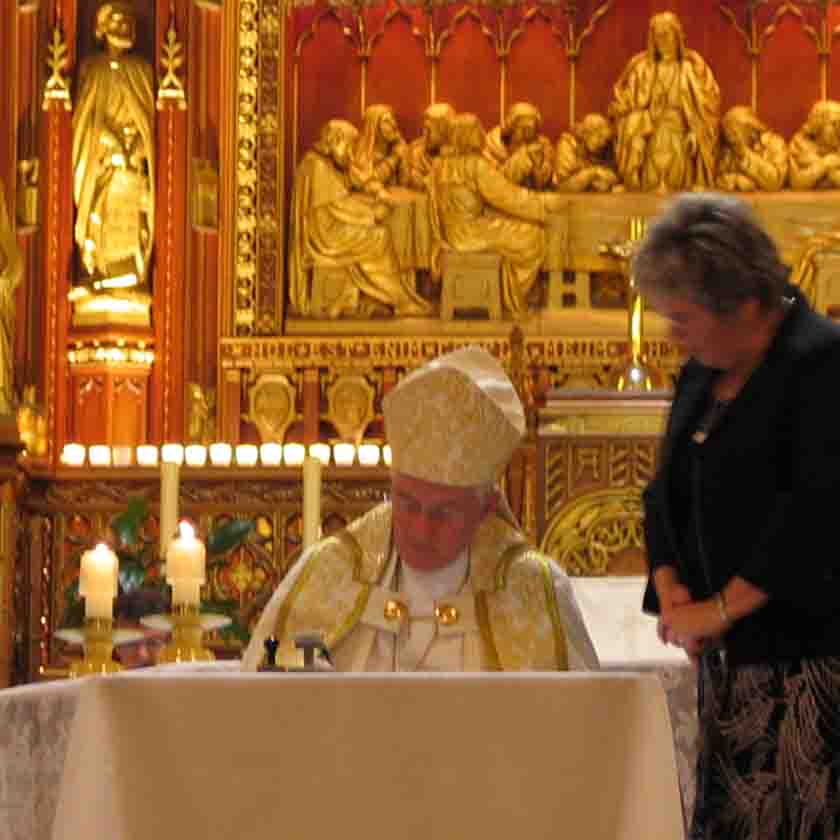 On June 16, 2008, at the end of the Eucharistic celebration on the first day of the International Eucharistic Congress in Quebec City, Cardinal Ouellet publicly announced the contents of a reply received from Rome the evening before: authorization was granted to open the Diocesan Inquiry for the Beatification and Canonization of Mother Julienne of the Rosary. Surprise! Jubilation in the crowd gathered there!

On September 14, the Opening Session was held at the Nativité-de-Notre-Dame Church in Beauport, Quebec. The following day and until the end of December, the Diocesan Tribunal, presided over by Monsignor Jean Pelletier, heard the persons chosen to testify.

The work continued with great intensity during the following year and a half, so that it became possible for the Archbishop of Quebec, Cardinal Marc Ouellet, to preside over the Closing Session on February 7, 2010, at the Notre-Dame Cathedral (Basilica) in Quebec City.

During the ceremony, he sealed the boxes containing all the acts of the Diocesan Inquiry and mandated Sister Françoise Guillot to see that they were sent to Rome. That was done in April 2010. From then on, the cause of Mother Julienne of the Rosary entered its Roman phase. The Congregation for the Causes of Saints issued the Decree of Validity on March 3, 2012. 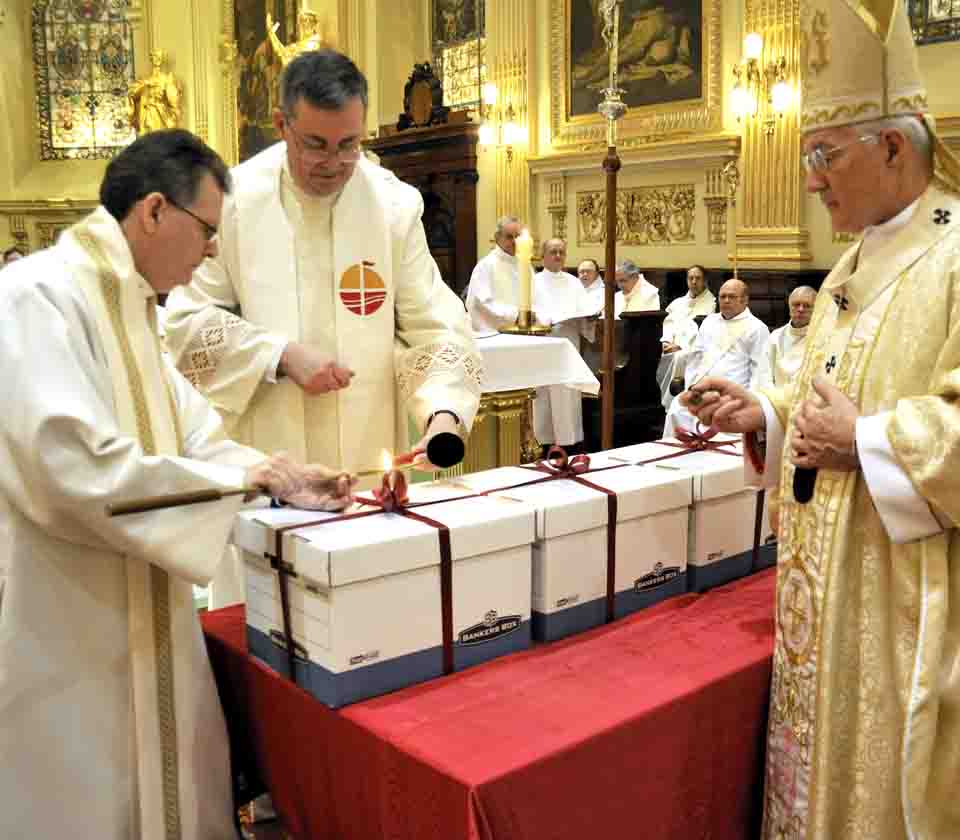