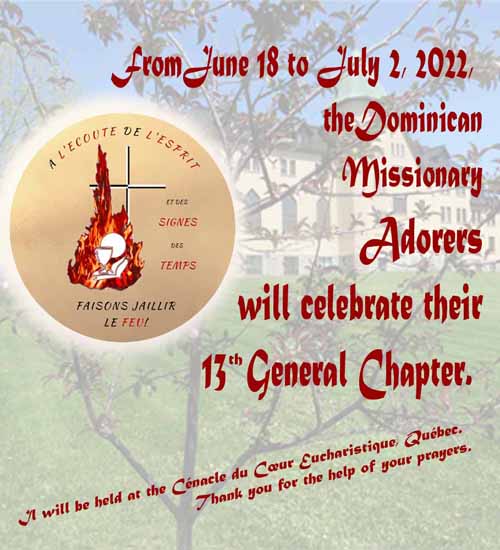 We are getting ready to live our General Chapter during the month of June 2022. Here is some information in the form of Questions and Answers to help you be in communion with us during this very important ecclesial event for our Congregation.

Every six years, a General Chapter takes place among the Dominican Missionary Adorers. We will try to describe this with some questions and answers.

What is a General Chapter?

A General Chapter is a gathering of the sisters in charge of the government of the Congregation, joined by delegates from Canada and Peru. The function of the Chapter is to evaluate the experience of the Congregation over the past six years, to elect a Prioress General and a new General Council, and to set the direction and priorities for the next six years.

Which General chapter will this one be in the history of the community and at what dates will it be held?

It will be the 13th General Chapter of the Congregation and will take place from June 18 to July 2, 2022, at the Motherhouse, the Cenacle of the Eucharistic Heart in Quebec City.

How many sisters will participate in this Chapter?

Eight sisters are ex-officio members (according to their responsibility - Prioress General, General Council, etc.), and eight sisters have been elected, in proportion to the number of sisters in each convent (Quebec and Peru). Thus, this General Chapter is made up of sixteen voters.

What is the theme of this General Chapter?

The theme of this General Chapter of 2022 is: "Listening to the Spirit and the signs of the times, let us make the fire spring forth".

Are the groups of the DMA Family also participating in the General Chapter?

A time of exchange by Zoom is planned with each one of the groups of the DMA Family to allow as many people as possible to make their contribution.

How is a General Chapter prepared?

A preparatory commission makes preliminary plans for the Chapter and decides what the ongoing schedule of the Chapter itself will be. The theme of the Chapter was chosen after receiving suggestions from the sisters of the Congregation.

Team sharing took place a few months before the Chapter. Themes and questions were proposed for these exchanges. Following these meetings, proposals were made and voted on in the conventual chapter, and then forwarded to the General Chapter. The sisters were also able to present individual proposals, supported by another sister.

What happens at a General Chapter?

The General Chapter opens officially with a Mass in honor of the Holy Spirit.

The first part is an evaluation of the life and mission of the Congregation during the last six years with, among others, the reports of the Prioress General and the General Bursar. This is followed by the meetings planned with the groups of the DMA Family. The Chapter then addressed some specific points to be decided before the elections.

The second stage begins with a day of retreat for the whole Congregation in preparation for the election of the Prioress General the next day, and the day after, the election of the members of the General Council. The study of the proposals as well as the discernment and decision making continues in the following days to decide together what will be the major orientations concerning our mission for the coming years.

We conclude with a festive supper, thanking the outgoing Prioress General and he Council for their service during their mandate, and thanking the newly elected sisters for accepting this important service for the life and mission of the entire Congregation.

How can we help to live the General Chapter?

A General Chapter is a Church-event because the Congregation is a member of the whole body of the Church. You are thus all invited to pray for the success of this Chapter. This success depends essentially on the openness of the members to listen to the Holy Spirit so that they may truly allow themselves to be led by Him in the discernments that are necessary to help the Congregation make its contribution to the life and mission of the Church in the world in the years to come.

Inspired by the page « Chapitre général : Questions et réponses » of the Brothers of Charity. Merci! https://brothersofcharity.org/chapitre-general-2018/chapitre-general-questions-et-reponses/?lang=fr